Broccoli Mac and Cheese with Bacon and Potato Nugget Topping I was feeling adventurous one day and wanted to try a non ooey and gooey kind of mac and cheese. This dish bakes up to be light and airy. Good way to add some veggies for the picky eaters in your family. You can also make it lower in fat by using skim milk and low fat cheeses. If you’re feeling adventurous, there are many other things you could toss in here such as ham-diced and browned, left over sliced chicken, more potato nuggets or more bacon, spinach, or other veggies hanging out in the fridge that need to be used up. 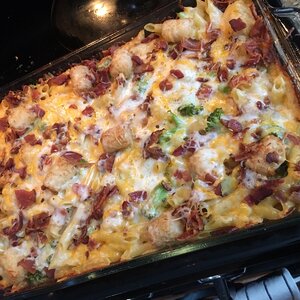